I am honored to have been asked by the President of ISMP, Michael Cohen, to be their keynote speaker at the 14th Annual ISMP Cheers Awards and Dinner at ASHP Midyear Clinical Meeting. The following is excerpted from a letter by Michael Cohen…

“We at the Institute for Safe Medication Practices (ISMP) are delighted that you have agreed to be the keynote
speaker at the 14th Annual ISMP Cheers Awards and Dinner on Tuesday, December 6, 2011. The event will be held at the New Orleans Board of Trade, 316 Board of Trade Place, New Orleans, Louisiana during the 2011 American Society of Health‐System Pharmacists Midyear Clinical Meeting”.

Below is a downloadable pdf flyer that details the ISMP event. Click on the image to download… 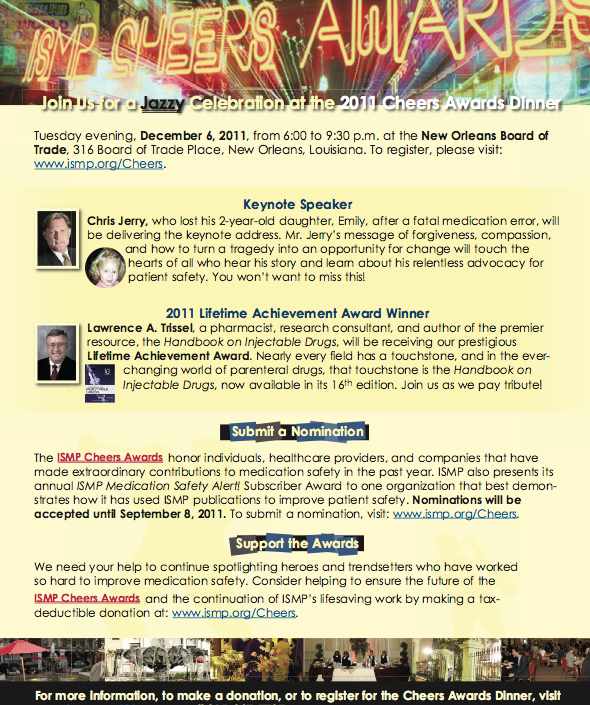 I gave a lecture last Monday, November 21st, at Ohio State’s College of Medicine in Columbus. Eric Cropp and I did this lecture together and everything went extremely well. We had over 130 students in attendance from OSU’s medical and pharmacy schools. I always look forward to these types of lectures and presentations to our future leaders in medicine. Read the amazing testimonial from Kenneth M. Hale the Assistant Dean for Professional and External Affairs, and Clinical Associate Professor of Pharmacy Practice and Administration. It is truly one of our most powerful recommendations to date!

Thanks to all who were in attendance. 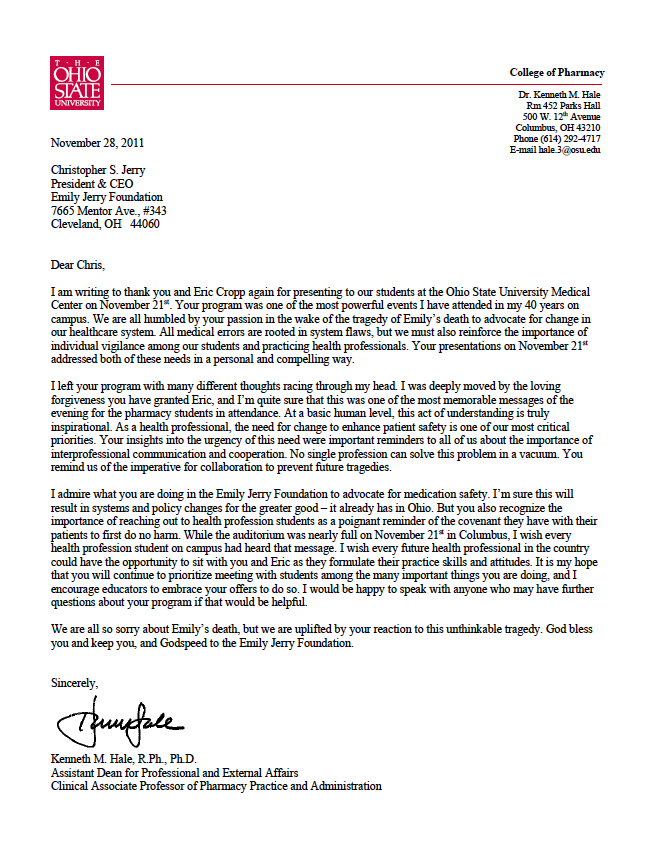 A great heartfelt article was recently written by Michael Cohen, President of the Institute for Safe Medication Practices (ISMP), a non-profit healthcare organization that operates the voluntary and confidential ISMP Medication Error Reporting Program. I am very proud to be affiliated with their organization. Together we can truly change things for the better…

A dad embraces the pharmacist responsible for his daughter’s death
MONDAY, NOVEMBER 14, 2011

Emily Jerry was just two years old when she died from a medication error made by a hospital pharmacy technician in Cleveland. She had undergone surgeries and four rounds of chemotherapy to treat what doctors said was a highly curable malignant tumor at the base of her spine.

According to her parents, Emily’s previous treatments had been so successful that her last MRI showed that the tumor had miraculously disappeared. This last treatment on her second birthday was just to be sure that there were no traces of cancer left inside of her. Tragically, the technician mixed her final dose of chemotherapy improperly, in a saline solution that was 23 times more concentrated than it should have been.

More than three decades later, Dennis Tribble, PharmD, is still haunted by the memory of one of the worst cases of his professional life. Now the chief pharmacy officer for Baxa Corporation, Dr. Tribble was at that time a pharmacist in a hospital he prefers not to name.

“I had been practicing for a number of years by that time. I failed to note that an adult dose of quinine had been prescribed for a pair of 10-year-old twins suffering from malaria. It put those kids into heart block and almost killed them,” said Dr. Tribble, his voice shaking.

What support did his hospital provide? “One of my bosses sat down with me and said, ‘I think you’ve already beat yourself up a whole lot more on this than I’m going to. You’re going to be a lot more careful, right?’ That was the extent of the counseling I got,” Dr. Tribble recalled. “To this day I look back on that incident in terror. I was functionally at less than half speed for about two weeks after that. I second-guessed every move I made. When this kind of thing happens, you don’t believe in yourself or in the quality of anything you do.”